If you’ve gone to graduate school or college, you know that money can get pretty tight during your years as a student. Even with careful budgeting, you can end up living on Ramen or macaroni and cheese- and that’s on a good day. The plights of poor students are well noted, from Marie Sklodowska-Curie, who frequently fainted from hunger while studying at the Sorbonne, down to Lindsay Milgroom, who advises readers to fill up on free food samples at the local mall food court and give up on shopping at Whole Foods because “this is about budgeting, not living a healthy lifestyle.”

An unhealthy lifestyle, credit card bills, growing student loan debt- these are just a few of the issues plaguing today’s college and graduate students, increasing their chances of suffering from depression or just dropping out of school altogether. Many of these issues are caused by a lack of money. However, most hard-core college and grad students don’t have the time to work a full-time or even part-time job. Strapped for both time and money, many students languish or go into serious debt. However, there is hope.

What if you could generate a second income without spending a lot of time and money?

Meet Ryan, the owner of and blogger at The Grad Student Way.

Ryan, like many graduate students, was chronically broke. He had a small stipend coming in but that wasn’t enough; on a month-to-month basis, Ryan would find himself “caught short.” While asking his parents for money got him by in the short-term, Ryan knew he had to become more proactive about his cash flow problem. He also wanted to help out his fellow graduate students solve their cash flow problems. This led to Ryan publishing the e-book “Generating a Second Income for the Poor Graduate Student”.

I had the opportunity to talk with Ryan in lovely downtown Madison last week. Ryan is currently hustling to finish up his thesis, but he was gracious enough to grant me an interview. In this interview, Ryan noted a couple of key factors that hold many promising would-be entrepreneurs back and how to work around them. He also shared some pertinent financial information with me, including how much it cost to create his e-book and how much money the e-book generated for him upon its initial release.

In short, writing and selling an informational product (in this case, an e-book) that relates to your particular situation and helps others solve a problem is a good way to make extra money. Doing this over and over can even become your livelihood.

There was something else that I learned from my interview with Ryan: By creating and marketing his own e-book, Ryan opened up a very unique job opportunity. This job opportunity would never have materialized if not for Ryan’s initiative and drive in creating his e-book.

But, you don’t have to take my word for it: Here is Ryan’s story in his own words:


This podcast opens up as an MP3 file. If you would rather read Ryan’s story, I’ve included the transcript of his interview here.

Does Ryan’s story get you all revved up to create your own product and generate a second income? Then read on…

It also provides poor college and graduate students with the following resources:

Ryan’s e-book normally runs for $4.99 on Amazon. However, for a limited time, “Generating a Second Income for the Poor Graduate Student” can be downloaded absolutely free. Just lick on the book link below- and be a poor college student no more! 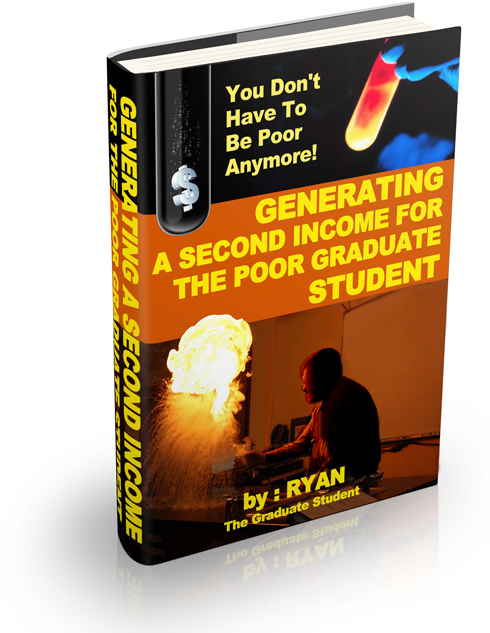 Generating a Second Income for the Poor Graduate Student

2 thoughts on “Generating a Second Income as a Poor Graduate Student: Free E-Book!”

How to Sell Baked Goods from Home in 6 Easy Steps

If you make sweet treats and want to learn how to sell baked goods from home and turn it into a business, follow these 6 steps to make it official.

9 Companies that Give Away Free Shoes by Mail

Who wouldn’t grab the chance of receiving free shoes by mail, right? Join These To Make Some Quick Cash Survey Junkie – The #1 survey site that doesn’t suck. Short surveys, high payouts, simply the best. Branded Surveys – Get paid CASH to share your thoughts on some of the world’s biggest brands. Nielsen – … Read more

Garage Sale Tips and How to Make the Most Money

These super-useful, tried-and-tested garage sale tips will help plan and maximize your earnings during your annual yard sale.