The Bad / Home typing and data entry jobs are being masqueraded as ways to make millions online by filling in forms. Real home typing jobs are almost impossible to find and usually don't pay more than minimum wage.

My Recommendation / Stop looking for something that doesn't exist. Easy work is outsourced to overseas companies who will work for pennies on the dollar. You just can't compete and you certainly won't get rich by doing it. We recommend you learn how to build a real, sustainable business online with our top recommendation.

We just couldn’t do it, y’all. Even though we promised here to review home typing jobs, the top search results are so blatantly misleading that we couldn’t bring ourselves to sign up. Not only are we certain that home typing jobs sites are are lying, but we also don’t want to give personal information and credit card numbers to dishonest people.

So we can’t claim to have tried what we’re about to trash. It’s just our collective opinion. Take that for what it’s worth. However, we are writing from lots of experience with sites that are long on hype and short on delivery.

Typistjobs.net is like all the others we’ve seen before. This post is an analysis of the red flags that are all over the site, not an insider’s review of the program.

Can You Make Money with Typistjobs.net?
No. Well, a very few will. In fact, if you choose to pursue the program that you bought, you’ll end up spending money, not earning it. That’s because you won’t be doing “typing jobs” at all. You’ll be doing affiliate marketing.

Why Typistjobs.net?
There are tons of sites offering to sell you the secrets of getting rich by typing at home. The link above includes a list of the top search results for “home typiing jobs,” each of them pretty much the same. Why settle on Typistjobs.net? It’s very simple: because of the gorgeous babe at the top of the page. Oh, be still, my heart! If I’m going to spend a lot of time looking at a site to dissect it, I might as well look at her instead of the cheesy stock photos and ugly snapshots at typingwealth.com.

What You Mean by “Typist Jobs”
When you go to Google looking for “home typing jobs,” here’s what you imagine: You think you’ll get hooked up with some company that needs you to type up paper documents to digitize them. Or maybe a law firm that needs you to transcribe audio files. You think you’ll do, you know, typing. You also believe that, in return for your work, you’ll get a paycheck. That’s what “job” means, after all.

Sites like typistjobs.net know this is what you’re looking for, and they use that knowledge to take your money. They know you’ll ask yourself, “Is this legitimate? Is it really possible?” They also know most people won’t think to ask, “Will I really be doing typing work? Will I get paid by the hour or based on my volume?”

What They Mean by “Typist Jobs”
You see, they let you think that their definition of “typist jobs” is the same as yours. That assumption is what gets people to take out their credit cards. But when you complain that they lied to you, they’ll say you misunderstood. To them, “typist jobs” means: “Creating affiliate ads and then sending them all over the Net.” To them, “getting paid” means: “Commissions you get if someone clicks on your ad and then buys what it offers.”

If that’s what you want to do, go for it. Lots of people make money online with affiliate ads, and if you’re going to get into it, you might as well start by buying from the page with the beautiful woman.

But if that’s not what you had in mind when you searched for typing jobs, run fast, run far. Typistjobs.net is chock full of red flags that shout, YOU ARE BEING MISLED. Here are some of them:

Further Proof of Affiliate Marketing
We sometimes take a lot of heat for reviewing a program that we haven’t actually tried. However, when it comes to websites like these, we know what we’re dealing with because we’ve already seen it all. To emphasize my point, take for example a screen shot of a “sample” entry form for your “home typing” job. (It’s found at the bottom of the FAQ page) The site leads you to believe that all you have to do is fill in this form and get paid. What they fail to tell you is that after you fill in the form, you’ll have to spend quite a few dollars in order to get an advertisement up and running through Google Adwords. 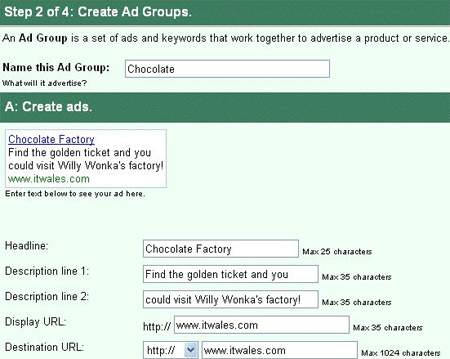 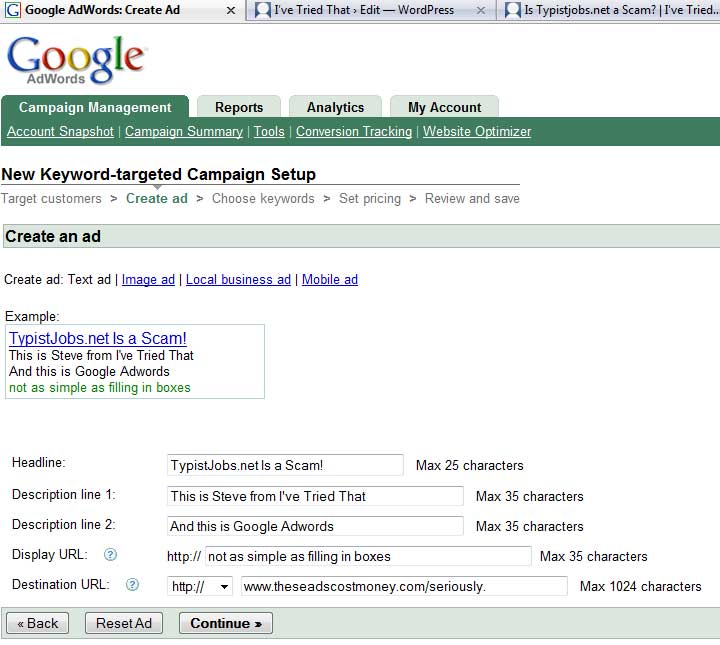 Notice the similarities? The screen shots aren’t matching exactly because the sample form used by TypistJobs.net is a few years old. You could say that it’s pretty convenient that they “forgot” to add in the Google Adwords logo, but I say it’s a deceptive ploy to scam you out of money.

The Bottom Line
You likely won’t make any money as a home typist or a home data entry clerk. It’s not you. You’re more than qualified. It’s that the work is often outsourced or you have tens of thousands of qualified people fighting over 1 spot that likely doesn’t pay over minimum wage.

51 thoughts on “Are Home Typing Jobs a Scam?”

4 Things to Know Before Starting A Baking Business From Home

Whether you want to take the occasional order and sell goods on the side or transition into a full-time baking business from home, these tips will help you.

Do Not Sign Up for the Home Income Profit System

It’s just another negative option scam. You sign up for a “free trial” and then they bill you for hundreds of dollars.

3 Challenges of Making Money Online and How to Beat Them

Making money online in 2019 is possible, but just like in the past, you may face numerous challenges that would prevent you from turning an online venture into a fulltime income stream. Learn how to deal with common make-money-online problems here.